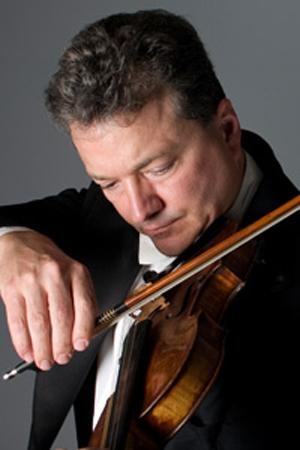 Eric Halen joined the Houston Symphony as Assistant Concertmaster in 1987. In 1997, he assumed the position of Associate Concertmaster and is presently Co-Concertmaster. After earning his bachelor’s degree at Central Missouri State University, he received his master’s degree at the age of 20 from the University of Illinois, while studying with Sergiu Luca. At age 23, he became artist/teacher of violin at Texas Christian University. Mr. Halen has performed in solo and chamber music programs in the U.S. and abroad, including solo appearances with the St. Louis and Houston Symphonies.

As a chamber musician, Mr. Halen has collaborated with many pre-eminent artists including violinist Sergiu Luca, cellists Gary Hoffman and Lynn Harrell, and pianists Christoph Eschenbach and John Kimura Parker. Locally, Mr. Halen has made frequent guest appearances with DA CAMERA of Houston, and CONTEXT. As a member of the Houston Symphony Chamber Players, he has toured the U.S., Japan, and Europe. Critics have described Mr. Halen’s violin playing as “sterling”, and “tenderly expressive and dramatic”. A review in the Chicago Sun-Times of Mr. Halen’s performance of Messiaen’s “Quartet for the End of Time” states, “…as the final, sustained tone of Eric Halen’s violin faded to close… there was no doubt that the evening had offered the best kind of virtuosity.” Mr. Halen plays a violin made in 1616 by Antonio and Hieronymus Amati.