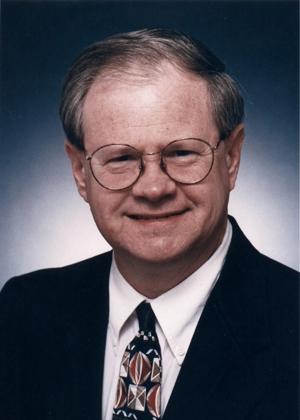 A native of Dallas, a young George Baker won the American Guild of Organists National Competition in Organ Playing in 1970 (at age nineteen) and created a sensation in the organ world with his subsequent featured recital for that organization’s national convention two years later. He then went to Paris to study organ and improvisation as well as to record. He returned to America to teach organ, then entered medical school. Almost four decades later he has come full circle, returning to music as a performer, improviser, composer and teacher.

George Baker has received training with some of the finest organ teachers of the twentieth-century. He obtained his Bachelor’s degree from Southern Methodist University under Robert Anderson, after which he traveled to Paris to study with Marie-Claire Alain, Pierre Cochereau, Jean Langlais and André Marchal. During his time in France, Baker earned the Prix de Virtuosité with Mention Maximum from the Schola Cantorum, under Langlais. Ultimately, he returned to the United States where he earned a Master of Music degree on full scholarship from the University of Miami, a Doctor of Musical Arts from the University of Michigan, and began teaching at Catholic University in Washington D.C. before deciding to undertake the challenge of becoming a medical doctor. Although he obtained his M.D. and became a dermatologist, Dr. Baker never ceased performing, composing, teaching and recording. In his early years as a musician, George Baker won first prizes by unanimous jury decisions in several major organ competitions including the American Guild of Organists (Buffalo, 1970), the Grand Prix de Chartres (Chartres, France, 1974) and the International Improvisation Competition (Lyon, France, 1979). His recording credits include the complete organ works of J. S. Bach (1979) and the complete organ works of Louis Vierne (world premiere recording, released in 1994, a project he shared with Pierre Cochereau). He has been awarded three French Grand Prix du Disque, two of which were for The Complete Organ Works of Darius Milhaud. In 1995, the eight CD Vierne set won the coveted Grand Prix Spécial du Jury from the Nouvelle Académie du Disque Français. In 2000, the same recording won a critic’s choice award from American Record Guide.

George Baker’s compositions, published by H. T. Fitzsimmons, Fred Bock Music, Baroque Notes Inc., and Gentry Publications, have been performed both in the United States and in Europe. His recent commissioned work, Variations on ‘Rouen’, received their world premiere in the September 13, 2010 PipeDreams Live! concert at the Meyerson Symphony Center in Dallas. On September 26, 2010, they received their European premiere in concert at St-Sulpice in Paris. Dr. Baker has served on juries in several prestigious organ competitions including the Grand Prix de Chartres in 2000 and 2004. Special areas of interest include the music of Louis Vierne and Maurice Duruflé, improvisation in the French style, and the organ building of Cavaillé-Coll. His is also in frequent demand as a consultant for organ building and restoration projects. He serves as the USA representative for Orgues Bertrand Cattiaux, French organbuilder, voicer and restorer of such instruments as Notre-Dame de Paris and St-Sernin de Toulouse.

In 2003, Naxos released Volume 13 of The Organ Works of Marcel Dupré, recorded on the restored and enlarged Perkins Chapel organ at SMU. In 2007, he recorded a CD of the works of his teacher Jean Langlais on the famous 1888 Cavaillé-Coll organ of St-Sernin de Toulouse. The following year, he recorded three of his own works at St-Sulpice in Paris as part of a CD honoring his former mentor Pierre Cochereau. These two CDs were released on the Solstice label (France). On March 7, 2009, Baker was one of three Cochereau students chosen to play a special concert at Notre-Dame de Paris, honoring the twenty-fifth anniversary of Cochereau’s death. His Toccata-Gigue on the Sussex Carol was performed at the 2009 King’s College Cambridge Lessons and Carols service, which was broadcast around the world on BBC Radio. His latest productions include a DVD video workshop on the subject of organ improvisation, released in 2011. This DVD features Paris Conservatoire improvisation professor and Notre-Dame de Paris titular organist Philippe Lefèbvre. His new Tiento Grégorien was commissioned by the Dallas Chapter AGO for their October 2010 opening service.

George Baker first appeared on the roster of Karen McFarlane Artists as a young artist, to which he returned at the beginning of the new millennium. He was a featured artist at the 2004 AGO National Convention in Los Angeles.