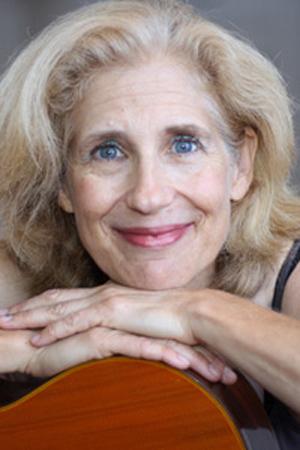 Rachel Buchman is a native New Yorker. Her performance career has brought her to stages and diverse venues throughout the United States, Europe and Israel, from New York’s Lincoln Center Out-of-Doors Festival to La Mama Experimental Theatre, to the Kennedy Center in Washington, D.C.; from Jones Hall to Infernal Bridegroom in Houston, from the barn loft to the concert stage on Orcas Island.

Rachel Buchman is a Certified Teacher of Dalcroze Eurhythmics and lecturer in music at Rice University’s Shepherd School of Music, and Head of the Young Children’s Division of the Michael P. Hammond Preparatory Program. She was invited by the former Dean Michael Hammond to create the program in 2000. She trains graduate student recipients of the Brown Fellowship to develop the intuitive musicianship of young children and teaches children’s Eurhythmics classes herself. Through JUMP! Just For U Music Program, a student run chamber music outreach program, she coaches Shepherd School students in the art of creative, eloquent and effective communication, giving them the skills to innovate contemporary approaches to performing diverse audiences. She has mentored several Shepherd School students who have won jobs with Tales & Scales, and have started outreach groups such as 47 Strings and Windsync. Ms. Buchman coaches musicians in the art of speaking and acting while playing, a skill increasingly in demand for musicians performing contemporary compositions. She coaches Shepherd School students who are just beginning their careers as teachers.

Since 2010, Ms. Buchman has been a Teaching Artist for the Orcas Island Chamber Music Festival. In addition to writing a family chamber music concert each summer, she works closely with Orcas Island teachers guiding them in bringing more music into the lives of the island’s families. She has performed with the Gryphon Trio, Jackie Parker, Aloysia Friedmann, composer Jake Heggie, the Kostov-Valkov duo and other festival musicians. She coaches OICMF musicians, and community musicians, in the art of performing for young people.

Since 2004, she has collaborated annually with Larry Rachleff, music director of the Shepherd School Symphony and Chamber Orchestras, in the Shepherd Society’s Family Concert. Her interactive, intelligent scripts follow in the footsteps of Leonard Bernstein’s Young People’s Concerts, leading audiences to a greater love for and understanding of orchestral music. The concerts present all kinds of music, from Peter and the Wolf with an entirely original introduction, to Sensemayá by Silvestre Revueltas. Ms. Buchman staged the Houston premier of Jon Deak’s Annie O.,performed by The Shepherd School of Music Brass Ensemble in collaboration with trumpet player, Marie Speziale. She has collaborated with conductors Thomas Hong and Daniel Myssyk, as well.

Ms. Buchman has recorded seven albums. Her latest, Rachel Buchman’s Homemade Band was released in 2010. Her previous six albums, on Rounder Records and A Gentle Wind labels, include: Shine Little Candles – a Grammy Awards semi-finalist (2001); Sing a Song of Seasons – named one of Six Best Recordings by Sesame Street Parents Magazine (1997); and Hello Everybody! Playsongs and Rhymes from a Toddler’s World – winner of The American Library Association, Parents’ Choice and Oppenheim Toy awards (1986). She was invited to contribute to the composite album, Hear and Gone in 60 Seconds, with Ella Jenkins and other artists. The album has won more than 8 awards and was a Grammy Awards semi-finalist (2003). Ms. Buchman’s songs have been used in the Seattle Symphony Serenade concerts; her rhymes are used on Scholastic’s “Circle Time Sing-Along.” Her songbook, Jewish Holiday Songs for Children, was published by Mel Bay (1997).

Ms. Buchman narrated The Snowman with the Houston Symphony Orchestra in December 2004, Carlos Prieto conducting. In the spring of 2007, she narrated the world premiere of Shel Silverstein’s “The Giving Tree,” music by Dan Sedgwick, with the Keene Chamber Orchestra conducted by Eric Schmacher. Her 2008 family chamber concert, Owl and Friends, included four pieces based on well-known children’s books, composed by Dan Sedgwick and Marji Gere for Ms. Buchman to narrate and sing. The concert included puppetry and songs by Alec Wilder and Moondog, and an appearance by Jacob Barton, inventor of the utterly new Udderbot. She created the chamber music performance, Elephants and Other Large Friends, (May 2009) directing, narrating and choreographing Poulenc’s The Story of Babar by Jean de Brunhoff and staging Ferdinand the Bull by Munro Leaf/music by Alan Ridout. In 2011, Ms. Buchman was invited to narrate the Leo Lioni tale, Swimmy, with music by Karim Al-Zand. Other chamber performances include John Cage’s Wonderful Widow of Eighteen Springs; fifteen of Cage’s 62 Mesostics re Merce Cunningham; narrating Rudyard Kipling’s “How the Whale Got His Throat,” and “How the Rhinoceros Got His Skin” with original music composed by percussionist Matt McClung. She performed for the new music ensemble, Barmusic, in its opening concert (June 2003).

In November 2009, Ms. Buchman played Mrs. Peachum in Brecht and Weil’s The Threepenny Opera, directed by Leslie Swackhammer, music director Cristi Macelaru, in a production that featured a newly developed script from the Brecht Foundation. In February 2007, she played a leading role in the world premiere of the musical, A Talmud Tale, by David Schechter, at the Jewish Community Center of Houston. She wrote and narrated a radio program about the repertoire of Suzuki Violin Book I for KUHF/KUHA, Houston’s National Public Radio and classical music station. Ms. Buchman has collaborated with documentary filmmaker, Brian Huberman. She performed songs for his film, Ray Hill - Citizen Provocateur. She researched and recorded music for the upcoming Alligator-Horses, about the Davy Crockett Almanacs of the 1830’s. She has worked with such internationally acclaimed directors as Alan Schneider and Liviu Ciulei.  In addition to her music and theatre career, Ms. Buchman performs voice-overs on radio, television, anime, film and industry.

For decades Ms. Buchman gave lecture performances of Jewish folk songs in Yiddish and Hebrew in New York, Boston, Houson and other cities, at synagogues, Jewish Community Centers and private homes. She continues her work in the Jewish community creating worship services for families with young children in collaboration with Rabbi Brian Strauss.

Ms. Buchman has taught music to young people, from toddlers to doctoral students, of every social and ethnic background, across the United States, in Europe and Israel. She has presented teacher workshops nationwide for the National Association for the Education of Young Children, Houston Grand Opera, Project Grad, Young Audiences, the Museum of Fine Arts Houston, the Bureau of Jewish Education, and other organizations. She has done research on the neurological effects that making and moving to music have on the brain.