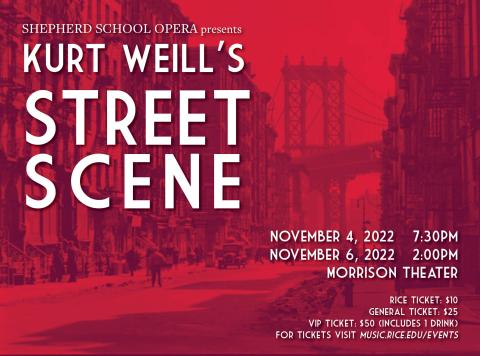 THIS PERFORMANCE IS SOLD OUT

Tickets are still available for the November 6 performance.

It’s a typical, scorching summer day outside a New York City tenement – neighbors gossip and go about their business as usual – but inside, tensions are escalating. When a shocking secret is revealed, the tension explodes into violence. Featuring music by Kurt Weill and lyrics by Langston Hughes, Street Scene won the 1947 Tony Award for Best Original Score, seamlessly blending European opera and American musical theater into a dramatic tour de force you won’t want to miss!

Cash bar will be available in the foyer beginning at 6:30 p.m. and during intermission.


This performance is funded in part by the Kurt Weill Foundation for Music, Inc., New York, NY