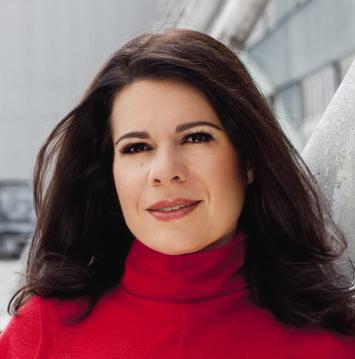 Grammy Award® winner Ana María Martínez is considered to be one of the foremost sopranos of her time, with an international career that spans the world’s most important opera houses and concert halls.  Her repertoire encompasses opera’s most intriguing and diverse leading ladies, and she engages her audiences season after season with signature roles, spellbinding debuts, and a myriad of captivating recordings.  In addition to a full calendar of performances, Ms. Martinez has recently taken on two exciting roles that expand her presence off-stage, including joining Rice University’s Shepherd School of Music as an Artist-in-Residence for the 2019-20 and 2020-21 academic years and Houston Grand Opera as their first-ever Artistic Advisor.

Ms. Martínez’s dynamic concert career includes engagements with some of the world’s most celebrated orchestras and conductors. She recently joined Esa-Pekka Salonen and London’s Philharmonia Orchestra for the World Premiere of the oratorio Dreamers. Written by composer Jimmy López of Peru and librettist Nilo Cruz of Cuba, Dreamers explores the immigrant experience in the United States. Ms. Martinez has sung in concert at the Teatro alla Scala with the Filharmonica della Scala, conducted by Gustavo Dudamel, with the New York Philharmonic at Carnegie Hall, conducted by Alan Gilbert, the Puerto Rico Symphony, San Antonio Symphony, Seoul Philharmonic, English National Opera Orchestra, Tchaikovsky Symphony in Moscow, the Orquestra Sinfonica Brasiliera in Rio de Janeiro, BBC Symphony, Berlin Philharmonic Orchestra, and the National Symphony of the Dominican Republic. She has joined the Boston Symphony, conducted by Bernard Haitink, the Ravinia Festival Orchestra, conducted by James Conlon, the Casals Festival in Puerto Rico, Washington National Opera Orchestra for a concert with Bryn Terfel conducted by Plácido Domingo, the Turkish Opera and Ballet Theatre in concert with Dmitri Hvorostovsky, and the Esterhazy Festival in Austria in concert with Joseph Calleja. She voiced the role of opera singer Alessandra in season three of Amazon’s Mozart in the Jungle.

Ms. Martinez won the Pepita Embil Award at the 1995 Operalia II, and has since been honored to tour around the world in concert with Plácido Domingo. Highlights of their performances together include concerts at HSBC Arena in Rio De Janeiro as part of the World Cup Celebration, her debut with the Los Angeles Philharmonic at the Hollywood Bowl conducted by Gustavo Dudamel, the Abu Dhabi Festival in the United Arab Emirates, at the Arena di Verona, The Teatro Real in Madrid, as well as at the White House. Together, they inaugurated the Dubai Opera House, and at the Salzburg Festival they recorded a live DVD all-Zarzuela concert entitled Amor, Vida de Mi Vida. Ms. Martinez has also performed on international concert tours with star tenor Andrea Bocelli. Highlights of their collaboration include her appearance on the Emmy nominated PBS TV special and DVD American Dream: Andrea Bocelli’s Statue of Liberty Concert with the New Jersey Symphony, as well as her participation in his star-studded performance in New York’s Central Park which was recorded live, entitled Concerto: One Night in Central Park. Ms. Martinez sings the title role in Manon Lescaut (Decca) recorded opposite Andrea Bocelli with Plácido Domingo conducting the Orquestra de la Comunitat Valenciana.

Ms. Martinez was born in San Juan, Puerto Rico and proudly represented the island as an honoree and performer in the 62nd Annual National Puerto Rican Day Parade in New York City. She received a Bachelor of Arts and a Master’s degree from The Juilliard School. For more information please visit: www.anamarimartinez.com