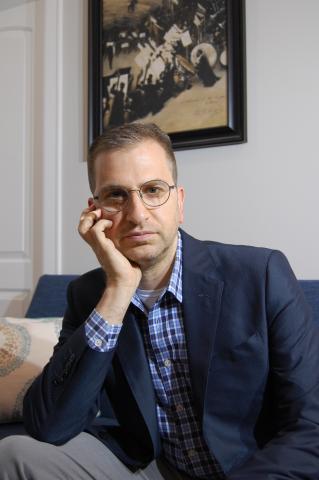 The music of Canadian-American composer Karim Al-Zand (b.1970) has been called “strong and startlingly lovely” (Boston Globe). His compositions are wide-ranging in influence and inspiration, encompassing solo, chamber, vocal and orchestral works. From scores for dance, to compositions for young people, to multi-disciplinary and collaborative works, Al-Zand’s music is diverse in both its subject matter and its audience. It explores connections between music and other arts, and draws inspiration from varied sources such as graphic art, myths and fables, folk music of the world, film, spoken word, jazz, and his own Middle Eastern heritage. Al-Zand’s music has enjoyed success in the US, Canada and abroad and he is the recipient of several national awards, including the Sackler Composition Prize, the ArtSong Prize, the Louisville Orchestra Competition Prize and the “Arts and Letters Award in Music” from the American Academy of Arts and Letters. He is a founding and artistic board member of Musiqa, Houston’s premier contemporary music group, which presents concerts featuring new and classic repertoire of the twentieth and twenty-first centuries. In his scholarly work, he has pursued several diverse areas of music theory, including topics in jazz, counterpoint, and improvisation (both jazz and 18th century extemporization). Al-Zand was born in Tunis, Tunisia, raised in Ottawa, Canada and educated in Montreal (McGill University, BMus 1993) and Cambridge (Harvard University, PhD 2000). He has taught composition and music theory at the Shepherd School since 2000.