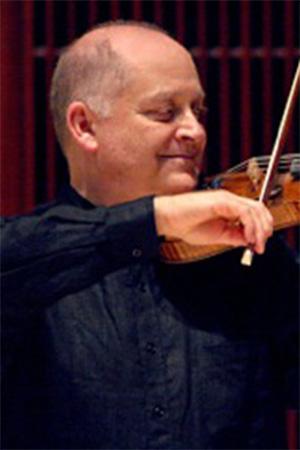 In the sixth decade of an active career as a chamber musician, soloist, concertmaster, and teacher, Kenneth Goldsmith reflects the musical ideals and sensibilities of his mentors and the experience of performing with many of the world’s finest artists.  Mischa Mischakoff, William Kroll, Pablo Casals, and Nathan Milstein were major influences in his early musical career.  He began studies of Baroque and Classical style with George Houle and Leonard Ratner at Stanford University in 1966 and he was one of the earliest teachers of baroque and classical violin in America.  Studies in 20th-century techniques were guided by Carlos Chavez, Gunther Schuller, Yannis Xenakis, Witold Lutoslawski, and Claus Adam.

In 1962 Mr. Goldsmith won both the Young Concert Artists Competition and the Concert Artists Guild Competition in New York City, and he won a special award at the Kennedy-Rockefeller Violin Competition in Washington, D.C. in 1980.  With the Mirecourt Trio (1973-1993) he was a finalist in the Naumburg Chamber Music Competition in 1976.  At nineteen he was the youngest member of the Detroit Symphony  and he has been concertmaster of several American symphony orchestras.  In the 1960’s and 70’s he performed with virtually every major conductor and soloist of that period.  In addition to the Mirecourt Trio, Mr. Goldsmith has been a member of many prestigious chamber groups including the Fromm Foundation Quartet, the American Arts Quartet, the Camerata Quartet, the Nashville String Quartet (Blair Quartet), the Claremont Festival Quartet, the Lyric Art Quartet, the Stanford Chamber Players, the Da Camera Society, and CONTEXT.  Mr. Goldsmith has performed as soloist and chamber musician in forty states, Europe, Asia, Mexico, Puerto Rico and Canada.

Mr. Goldsmith’s teaching career began in 1964 at the new Blair Academy of Music (now the Blair School of Music at Vanderbilt University) in Nashville, where he was concertmaster of the Nashville Symphony.  Mr. Goldsmith has taught Violin, Viola, Chamber Music, Music History, Performance Practice, and String Pedagogy.  He has served on the faculties of Stanford University (1966-71), California State University, Fullerton (1971-75), Pomona College (1974-75), California State University, Irvine (1974-75), Grinnell College (1975-87), University of Houston (1987-1991), and since 1991 he has been Professor of Violin at the Shepherd School of Music at Rice University.  A master teacher, Mr. Goldsmith has former violin students in major symphony orchestras (Chicago, Boston, Houston, San Francisco, Los Angeles, Philadelphia, Dallas, Seattle and Pittsburgh), in opera and ballet orchestras (Metropolitan Opera,  Houston Grand Opera, San Francisco Ballet, Houston Ballet), in string quartets (Juilliard, T’ang, Enso, Jasper, Dover and Rolston), in period music ensembles in the United States and Europe, and on the faculties of colleges and universities throughout the United States.