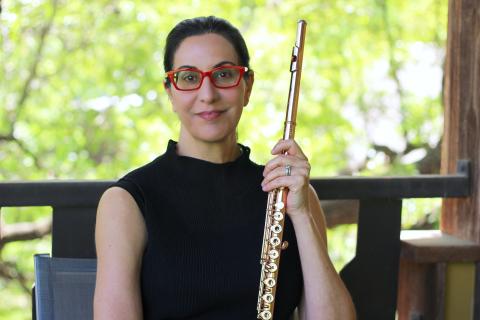 Ms. Gedigian performed with the Boston Symphony Orchestra for over a decade, including several seasons as acting principal flute under Seiji Ozawa. As principal flute with the Boston Pops Esplanade Orchestra and acting principal flute with the Boston Pops, Ms. Gedigian has performed on dozens of recordings with the Boston Symphony and Boston Pops Orchestras, Evening at Pops public television broadcasts as well as the nationally broadcast Fourth of July specials. She has also been heard on several John Williams’ movie scores, including Saving Private Ryan and Schindler’s List and can be seen in the film Blown Away. In the 2000 - 2001 season, Ms. Gedigian was invited by Mariss Jansons to perform as acting principal flute with the Pittsburgh Symphony Orchestra. Her solo performances have taken her around the world, including recitals in Japan, Australia, China, Canada, Europe, and Armenia and she has appeared as concerto soloist numerous times with the Boston Pops Orchestra and with the Armenian Philharmonic performing her own transcription for flute of the Khachaturian Violin Concerto.  During her years in Boston, she performed as principal flute with every major arts organization including the Opera Company of Boston, Musica Viva, Boston Chamber Music Society, and as a member of Boston Ballet Orchestra. She was featured with flutist and vocalist Ian Anderson of Jethro Tull fame in performance at the Berklee College of Music in Boston.  Ms. Gedigian has presented recitals, concerti, and master classes at numerous universities, conservatories, and festivals across the United States as well as in Australia, Canada, China, Italy, Japan, England and Austria.

She won First Prize in the James Pappoutsakis Memorial Flute Competition and the National Flute Association’s Young Artist Competition and was later featured in the NFA Annual Convention Gala and Headliner performances in Pittsburgh, New Orleans, San Diego and Orlando. She was founding member of the Boston-based Walden Chamber Players and was formerly a member of the Dorian Wind Quintet, one of chamber music’s pre-eminent and longest continuously active ensembles. Her solo recordings include Voice of the Flute and Revolution, both with pianist Rick Rowley and chamber music for flute, strings and piano, The Evolution of the American Sound, a collection of music that explores the American voice during the early to mid-twentieth century, with the Walden Chamber Players. Ms. Gedigian authored an allegorical tale, Survival of the Flutist, with illustrator Patti Adams published by Flutistry Boston.

Summer festival appearances include Brevard Music Center, ARIA International Summer Academy, Round Top International Music Festival, the Tanglewood Music Center, and the Boston University Tanglewood Institute. Prior to her tenure at The University of Texas at Austin she was on faculty at Boston University College of Fine Arts and Boston Conservatory. She studied in Boston with Leone Buyse and Doriot Anthony Dwyer, and in Michigan with Clement Barone and Donna Olkowski.