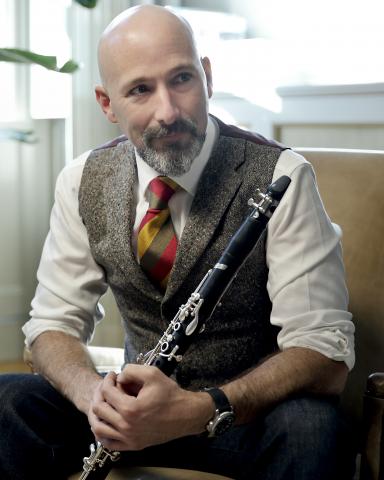 There are those who define their instrument and those who are defined by their instrument. Richie Hawley, a musician whose name has become a byword for exceptional clarinet playing, is among the distinguished former group. Richie is one of the most celebrated clarinetists of his generation, a sought-after recitalist and chamber musician who regularly appears on stages around the world. During his 17 years as principal clarinet of the Cincinnati Symphony Orchestra (CSO), Richie made an indelible mark on the institution. Hailed by the Cincinnati Enquirer as “an example of the real virtuosity that lies within the [CSO’s] ranks” and praised for possessing the “seamless flowing tone so many clarinetists long for and few can achieve,” he has wowed audiences and critics with his technique and velvety tone. Richie has also left his mark on recorded classical music, appearing on dozens of albums with the CSO. With many of the 60+ TELARC recordings by the CSO and Cincinnati Pops during his tenure featuring major solos of the clarinet repertoire, Richie’s memorable playing has been frequently singled out. American Record Guide hailed his "gorgeous" solo in Rachmaninoff’s Symphony No. 2 as "the crowning achievement" of the CSO’s recording with Maestro Jesus Lopez-Cobos.

Richie is as much an educator as he is a performer, a leader of his own generation who is dedicated to inspiring future ones. In 2011, Richie left the Cincinnati Symphony Orchestra and moved to Houston, Texas to become the Professor of Clarinet at Rice University's Shepherd School of Music. During the summer months he is in residence as a faculty artist at the Music Academy of the West in Santa Barbara, California, one of the premiere summer festivals for exceptionally talented musicians. His public clarinet masterclasses are among the best attended at the Music Academy, where students and audiences alike are drawn to his impeccable musicianship and charming, seemingly effortless teaching style. Richie’s students have gone on to win positions in the National Symphony Orchestra, the Detroit Symphony Orchestra, the Orchestre Symphonique de Montréal, the Cincinnati Symphony Orchestra, the Los Angeles Philharmonic and many others.

Richie has garnered awards both as a performer and an educator. He won the Coleman-Barstow prize at the Coleman Chamber Ensemble Competition in 1988 with Trio con Brio, the same year he was one of five musicians to receive the Gold Medal as a Presidential Scholar in the Arts from Ronald Reagan in a ceremony at the White House. He is a two-time recipient of the Léni Fé Bland Foundation Career Grant and was awarded the 2009 Glover Award for outstanding teaching at University of Cincinnati College Conservatory of Music.

2021 will see the release of A Gentle Notion, the first album from the Hanick Hawley Duo, a new collaboration with pianist Conor Hanick. Featuring newly commissioned works alongside fresh interpretations of mainstay classics, Richie and Conor seek to shine a light on all the extraordinary music written by American composers for clarinet and piano, to reinvigorate and reestablish the clarinet and piano repertoire in the 20th and 21st century.

A native Angeleno, Richie began studying clarinet with Yehuda Gilad at the Colburn School of Performing Arts at age 9. He made his orchestral solo debut at age 13 with the Los Angeles Philharmonic; his New York Philharmonic solo debut came only a year later at the age of 14. While a student of Donald Montanaro at the Curtis Institute of Music, Richie appeared as a soloist with the Philadelphia Orchestra.

Richie is a proud D’Addario performing artist who plays exclusively on reeds and mouthpieces that he helped develop. He is also an artist for Buffet Crampon and performs on the Tosca model of clarinet.

Richie Hawley , Professor of Clarinet and Chair of Woodwinds