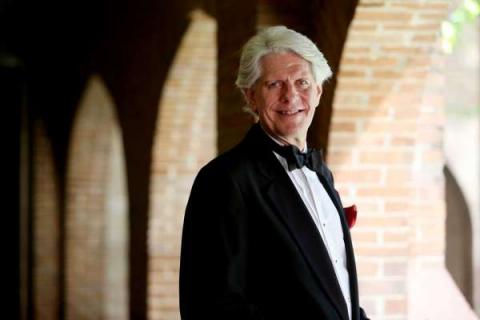 Robert Simpson, AAGO, ChM, SMM, is Organist-Choirmaster at historic Christ Church Cathedral (Episcopal), Houston, Texas and Founder and Artistic Director of the Houston Chamber Choir, Houston’s only professional concert choir. He also serves on the faculty of The Shepherd School of Music, Rice University as Lecturer in Church Music.

Mr. Simpson’s choirs have toured Europe and Mexico, and performed before national conventions of Chorus America, the American Choral Directors Association, The American Guild of Organists, The Association of Anglican Musicians, and The Hymn Society of American. They have appeared nationally over CBS-TV, ABC-TV and American Public Radio.

The Houston Choir was honored to be the only chamber choir selected from the United States to appear in the 2002 Llangollen Choral Competition in Wales where it received the Bronze Medal in the Folksong Competition. It also has received an invitation to perform at the 2003 national convention of the American Choral Directors Association in New York City next February. This is the Choir’s second invitation. It sang in Chicago’s famed Orchestra Hall as part of the 1999 ACDA convention. The Chamber Choir’s debut CD, The Blue Estuaries, was recently released internationally on the Zephyr label.

In the summer of 2000 the Christ Church Cathedral Choir undertook a tour of English Cathedrals during which it recorded its first CD, Amidst These Ancient Stones. In 1997 the Choir performed in Austria and the Czech Republic. In July 2003, the Cathedral Choir returned to England to sing at Westminster Abbey, Clare College, Cambridge and Norwich Cathedral. Prior to moving to Texas in 1993, Mr. Simpson served as Organist-Choirmaster at the Cathedral of St. Philip, Atlanta, Georgia, one of the largest Episcopal churches in the United States. Under his leadership The St. Philip Choir made several recordings including Great Hymns of the Church, produced and distributed by the National Episcopal Church.

Mr. Simpson has served as Adjunct Professor of Organ at Georgia State University and Senior Teaching Fellow at the University of Texas, Austin. An active clinician and guest conductor, he has been on the faculty of many music festivals including those at Lake Junaluska and Kanuga conference centers in North Carolina, the Sewanee Tennessee Province Conference on Church Music, the Evergreen Colorado Music Conference and regional choral festivals in Sacramento and San Jose, California.

In 1989 Mr. Simpson earned the Associate and Choirmaster Certificates from the American Guild of Organists, receiving the S. Lewis Elmer Prize for attaining the highest test scores. Mr. Simpson served as Vice Chair of the Standing Commission on Church Music for the Episcopal Church and on the Editorial Board of the African American hymnal Lift Every Voice and Sing II. He is currently a member of the Board of Directors of Chorus America, a national service organization addressing the needs of professional and volunteer choirs.