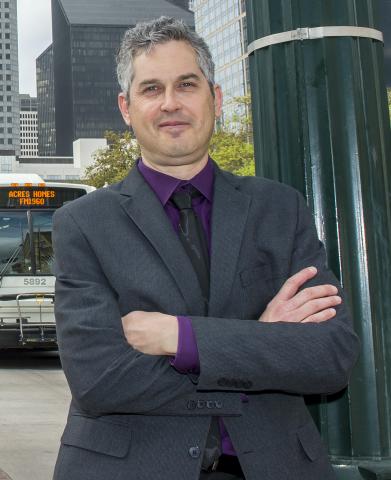 Composer Anthony Brandt (b. 1961) earned his degrees from California Institute of the Arts (MA '87) and Harvard University (BA '83, PhD '93). His honors include a Koussevitzky Commission from the Library of Congress and grants from the National Endowment for the Arts, Meet-the-Composer, the Houston Arts Alliance, the New England Foundation for the Arts, and the Margaret Fairbank Jory Copying Assistance Program.  He has been a fellow at the Wellesley Composers Conference, the Tanglewood Institute, the MacDowell Colony, and the Djerassi Resident Artists Colony, a Visiting Composer at the Bowdoin International Festival, the FICA Festival at the University of Veracruz, the Bremen Musikfest, Baltimore’s New Chamber Arts Festival, Southwestern University, SUNY- Buffalo and Cleveland State University, and Composer-in-Residence of Houston’s OrchestraX and the International Festival of Music in Morelia, Mexico.  His commissions include works for Performing Arts Houston, the Lousiana Philharmonic, Opera in the Heights, the River Oaks Chamber Orchestra, the Metamorphosen Chamber Orchestra, Da Camera of Houston, KINETIC, SOLI, Houston Ballet II, the Bowdoin International Festival, the Moores School of Music Percussion Ensemble, Webster Trio, Fischer Duo, and others. Albums of his chamber operas Kassandra and Ulysses, Home, with libretti by Neena Beber, and his oratorio Maternity, with a libretto by David Eagleman, have been released by Navona.  An album of his vocal music, including his chamber opera The Birth of Something, with a libretto by playwright Will Eno, is available on Albany Records.  A recording of his work Roundtop Trio is available on the Crystal label.

Dr. Brandt is co-founder and Artistic Director of the Houston-based contemporary music ensemble Musiqa, two-time winners of Adventurous Programming Awards from Chamber Music America and ASCAP (2013 and '16).  Musiqa has presented the music of over 225 living composers, including over 70 world premieres.  Musiqa’s free educational programs have served over 60,000 students and teachers at over 240 Houston public schools and earned eleven awards from the National Endowment for the Arts.  Musiqa recently founded the Cross-Country Chamber Consortium aimed at increasing diversity in modern chamber music repertoire.

Dr. Brandt and neuroscientist David Eagleman have co-authored The Runaway Species: How Human Creativity Remakes the World.  Their book has been published in fourteen countries, was the official selection of the 2018-19 Texas State Common Reading Experience, and inspired the Netflix documentary The Creative Brain hosted by Dr. Eagleman.   Dr. Brandt has also contributed chapters to the Oxford Handbook of Music and the Brain and upcoming Oxford Handbook of Music and Language as well as several other volumes, and published papers in the Creativity Research Journal, Frontiers, Brain Connectivity, and other journals.  He is currently a co-PI in an NEA Research Lab examining the benefits of musical creativity for the elderly, as well as studies involving music and stroke recovery, surgeon burnout, and more.   He has organized three international conferences at Rice on “Exploring the Mind through Music," most recently in June 2016.

Dr. Brandt is a Professor of Composition and Theory at Rice University’s Shepherd School of Music.  He has been awarded the University’s Faculty Award for Excellence in Professional Service and Leadership (2019), a George R. Brown Award for Superior Teaching (2007), and a Phi Beta Kappa Teaching Award (2001).