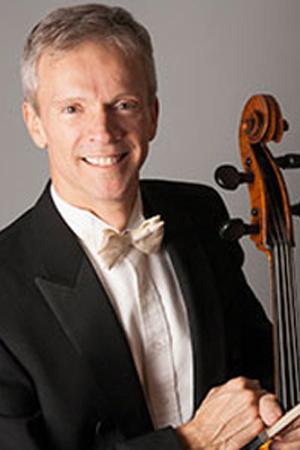 Christopher French is the associate principal cellist of the Houston Symphony. Before joining the orchestra in 1986 he held titled positions in both the Shreveport and Honolulu symphonies. A graduate of North Park University in Chicago, he was the recipient of that school’s highest honor, the “Performance Award.” Chris is the seventh in a full octave of musical siblings.

Chris believes that his musical experiences have led him to a number of conclusions about the nature of the orchestral musician. Being able to do the work that one loves is a dream not deferred. With that perspective comes the necessity of finding new ways to learn and keep one’s challenges fresh. That journey includes concerto performances with the Houston Symphony, appearances on the Chamber Players series, Da Camera of Houston, and with the Greenbriar Consortium. He is featured on a CD of the music of Matthew Fields, “Music Among Friends”, available on the Centaur label. He is a regular participant in the Mainly Mozart Festival in San Diego. These opportunities are chances to learn through new challenges.

Perhaps more fundamentally, Chris believes his experiences give both a responsibility and an opportunity to learn and refine for others. Chris teaches orchestral repertoire at Rice University’s Shepherd School of Music and is also actively involved in teaching cello to younger students. For two seasons Chris was the cello coach for the Youth Orchestra of the Americas as they prepared for their international tours. He also has given numerous coaching sessions in Venezuela and Mexico and was a featured speaker at the Texas Music Educators Association Conference. More and more, working with younger cellists is an opportunity to return the benefits he has received through his musical journey.