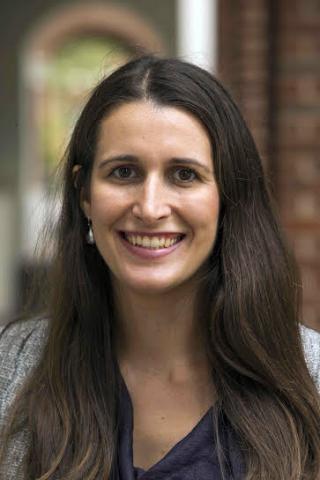 Danielle Ward-Griffin is an Assistant Professor of Musicology. She received her PhD from Yale University and a Bachelor’s of Music from McGill University. Her research examines the performance, mediatization and production of twentieth-century opera, focusing in particular on Benjamin Britten and television broadcasting. Articles on these topics have appeared in the Journal of the American Musicological Society (JAMS), Cambridge Opera Journal, Opera Quarterly, Journal of the Society for American Music, and Music & Letters. She has also contributed chapters to Rethinking Britten, Benjamin Britten Studies and Britten in Context.

Her article, “As Seen on TV: Putting the NBC Opera on Stage” (published in JAMS) won the 2019 Deems Taylor/Virgil Thomson award from ASCAP. Another article, “Realism Redux: Staging Billy Budd in the Age of Television” (published in Music & Letters) won the Westrup Prize from the Music & Letters Trust and the Ruth Solie Award from the North American British Music Studies Association. She has also been the recipient of the Virgil Thomson Fellowship from the Society for American Music and the Temperley Prize from the North American British Music Studies Association. Her research has been supported by the Center for the History of Business, Society and Technology, the Ucross Foundation, the MacMillan Center for International Studies and the University of Wisconsin-Madison Libraries.

She is currently writing a book on opera on television from the 1950s to the 1970s. Before coming to Rice, she taught at Christopher Newport University in Virginia.