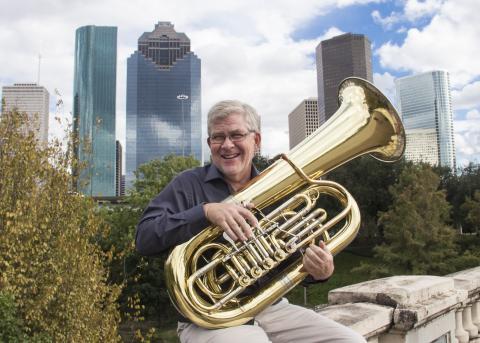 David Kirk has served on The Shepherd School of Music faculty since 1982.

Mr. Kirk enjoys an international reputation for effective teaching of musicianship and the physical aspects of wind playing. He has presented master classes throughout North America and in Japan. In addition to his work at the Shepherd School, Mr. Kirk is Principal Tubist of the Houston Symphony. He was selected for his teaching and playing positions during his final year of undergraduate studies at the Juilliard School. While at Juilliard, he studied with Don Harry. Kirk’s other teachers include David Waters, Chester Schmitz, Warren Deck, and Neal Tidwell.

Mr. Kirk appears as a guest performer with ensembles throughout the US. Locally, he is an active recitalist, chamber music collaborator, and spokesman for the musical arts. He may be heard on Houston Symphony recordings under conductors Sergiu Comissiona, Newton Wayland, Christoph Eschenbach, Michael Krajewski, Hans Graf and Andrés Orozco-Estrada. His solo playing is featured on Mark Custom Recordings’ The Music of Leroy Osmon, Volume 1.

A unique aspect of Shepherd School tuba studies is limited class size. In the interest of maximizing playing and performance opportunities, 2-3 students are enrolled each year. Contact David Kirk to determine the current status of studio vacancies.