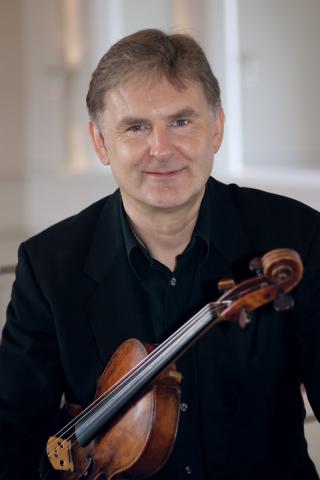 Ivo-Jan van der Werff has attained accolades as a chamber player, recitalist, guest artist and teacher worldwide. As a member of the Medici String Quartet for 30 years, Mr. van der Werff has performed in over 2,000 concerts in major festivals and venues globally, broadcasting regularly on radio and television. The Medici quartet made more than 40 recordings for EMI, Nimbus, Hyperion and Koch of works ranging from Haydn, Britten, Janacek, Schubert and the Beethoven cycle to more eclectic works of Saint-Saens, Wajahat Khan and Nigel Osborne. The quartet had collaborations with many artists across the musical, literary and theatrical spectrum including the Royal Shakespeare Company, George Martin, Mitsuko Uchida, Alan Bennett, John Williams, John Thaw and Jack Brymer.

Mr. van der Werff has performed as recitalist in New York, New Zealand, Portugal and Hong Kong as well as numerous venues throughout the United Kingdom. His recordings for ASV and Koch include Sonata, Op.107 by Max Reger and the complete works for viola and piano/harp by Arnold Bax. His most recent recording is of works by Al-Zand, Shostakovich and Britten released on the Guild label.

Mr. van der Werff is often invited to collaborate with chamber ensembles throughout Europe, the USA and the Antipodes, such as the Montrose Trio, New Zealand, Alberni, Coull and Bridge String Quartets, Redcliffe and Adderbury Ensembles and the Trio con Brio of Copenhagen. He has also collaborated with such world renowned musicians as Lynn Harrell, Cho-Liang Lin, John Kimura Parker, Kyung Sun Lee, Daniel Hope and with members of the Tokyo, Emerson and Juilliard quartets.

As a soloist Mr. van der Werff has performed the Walton Concerto, Mozart's Sinfonia Concertante (with the Philharmonia Orchestra) and Vaughan Williams 'Flos Campi' and has been invited to appear as guest principal viola with many of the UK's leading orchestras.

For many years Mr. van der Werff was a professor of viola and chamber music at the Royal College of Music in London and, since 2007 has been full time professor of viola at Rice University in Houston, Texas. He has developed a private viola program near London and is director of the Summer Viola Retreat held in either Upstate New York or in the Lake District in the UK. He has taught at many summer schools and festivals  such as Dartington and Oxford in the UK, Schlern in the Italian Alps, in Sweden, at the Texas Music Festival, California Summer Music, Bowdoin and Madeleine Island in the USA and Domaine Forget in Canada.

Mr van der Werff has given masterclasses all over the world at schools such as Eastman, Colburn, San Francisco Conservatory, Vanderbilt and Santa Barbara in the USA, Trinity College, the Royal Northern College, Royal Scottish Academy and the Royal College in the UK, the Royal Academy in Stockholm, the Hong Kong Academy for the Performing Arts as well as in Australia, New Zealand, Norway, Croatia and Portugal amongst others.

Many of his former students hold principle and regular positions in orchestras such as the BBC Symphony, Philharmonia, London Symphony, Royal Philharmonic, English Chamber and English National Ballet as well as orchestras in Spain, Portugal, Norway, Sweden, New Zealand, Mexico, France and the USA.

For many years he also played in London studios on literally hundreds of sound tracks for film, pop and television ranging from Harry Potter, Lord of the Rings and James Bond to Madonna, Mariah Carey to Pride and Prejudice and Doctor Who.

In 2011, inspired by his viola mentors, Ivo-Jan van der Werff published a book entitled ‘A Notebook for Viola Players’ which consists of a series of exercises and explanations on and about viola technique.