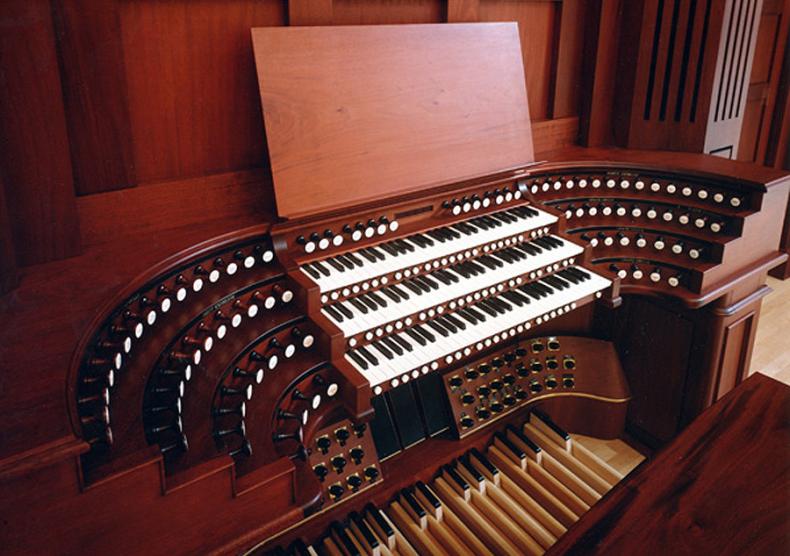 From its earliest conception, the grand concert organ for The Shepherd School of Music at Rice University was designed to be a singular instrument with a unique identity and voice, capable of playing four centuries of organ literature in a convincing way.

After extensive study, organ builder Manuel Rosales of Rosales Organ Builders, Inc. of Los Angeles and Clyde Holloway, Professor of Emerita Organ at The Shepherd School of Music, determined that an organ with the tonal characteristics valued in France during the eighteenth, nineteenth, and twentieth centuries would offer the greatest flexibility in playing the largest segment of the literature. This kind of organ would also adapt to the music of many countries from earlier centuries and from centuries to come. They decided that a relatively large instrument was a necessity, not for reasons of dynamic scope, but to be able to provide all of the essential voices required by a large portion of the organ repertoire.

The generous philanthropy of the late Mrs. Edythe Bates Old made it possible to finish the interior of the hall which now bears her name and to begin construction of the organ that now elegantly fills that space. Mrs. Old was a gifted singer, pianist, choral conductor, watercolorist, and teacher from Highlands, Texas, who for many years taught music, art, and English in the public schools of Houston, as well as English and Greek literature at the University of Houston.

Before the actual construction of the organ began, C.B. Fisk, Inc., of Gloucester, Massachusetts, was invited to join the project to bring its expertise in building organs of diverse sizes and tonal designs. A study tour to France ensued, focusing on French organ-building traditions. Fisk-Rosales Opus 109/21 is the result of this research and shared vision. Indeed, this instrument combines the talents and capabilites of all those involved in its planning and construction in an indivisible artistic achievement. 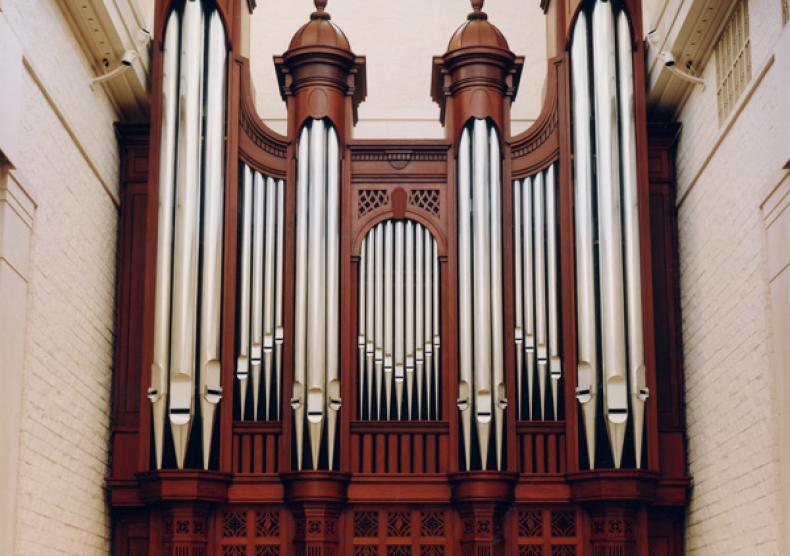 The Fisk-Rosales organ was built entirely in Gloucester in 1995 and delivered to the Shepherd School on January 15, 1996.

The voicing of the organ pipes - the meticulous and painstaking adjustment of the tone, volume, and speech of each pipe - began six weeks later and was accomplished by both firms during the twelve months ending in March 1997.

Charles Nazarian, known for his design of numerous organ cases throughout the country, created the instrument's visual design. Inspired by French Classical examples that feature dramatic vertical towers, the Honduran mahogany organ case rises to a height of 49 1/2 feet. It integrates a three-manual and pedal console with 94 ebony and cocobolo draw knobs en amphithéâtre, a configuration that puts the control of the stops within easy reach of the performer. Recalling some of the most celebrated consoles of late-nineteenth century French organs, the elegantly curved terraces with gold-embossed leather borders surround the bone and ebony manual keys and the maple and ebony pedal keys. The various historic traits found in this organ coexist effectively with a state-of-the-art computerized stop action and memory system that allows hundreds of preset combinations of stops to be recalled at the touch of a button.

The organ contains 75 stops that control 4,493 pipes constructed from polished tin (façade pipes), hammered tin, scraped tin, spotted metal, hammered lead, poplar, pine, basswood, and cherry. A valve that brings wind to each pipe is connected to a keyboard by a direct mechanical link called a tracker. An ancient mechanical system, tracker action has been in use for more than 700 years and is still the most reliable, simple, and sensitive means of giving the performer intimate control over the speech of the pipes.

The tracker action on the lowest manual of this organ, the Grand Orgue, is augmented with a servo-pneumatic machine that reduces the resistance felt on the keys when playing with the sub octave couplers (octaves graves) or when other manuals are coupled to it. The servo-pneumatic machine was developed several years ago by Stephen Kowalyshn of C.B. Fisk, Inc., and differs from similar pneumatic devices in the past. The Fisk servo-pneumatic machine can be completely disengaged so that the lowest manual can be played without the assistance afforded by the machine. It also has the advantage of maintaining complete control over the speech of the pipes (as if playing without mechanical assistance) while still mitigating the physical energy required to depress the keys.

There are several distinctive tonal characteristics of this organ that listeners will easily recognize: a large number of distinctive flue pipes that give the organ its smooth foundation tone; an effective complement of mutation stops (indicated in the specification by pipe lengths containing fractions) that give color and pungency to the flue pipes with which they are almost always combined; and fiery reeds that can dominate the entire ensemble of pipes to give it weight and power.

The distinguished visual and tonal aspects of the Edythe Bates Old Grand Organ compel us to celebrate the inauguration of a new era of performance, study, and enjoyment of the King of Instruments as we offer to Houston and the nation a musical landmark of unparalleled significance.