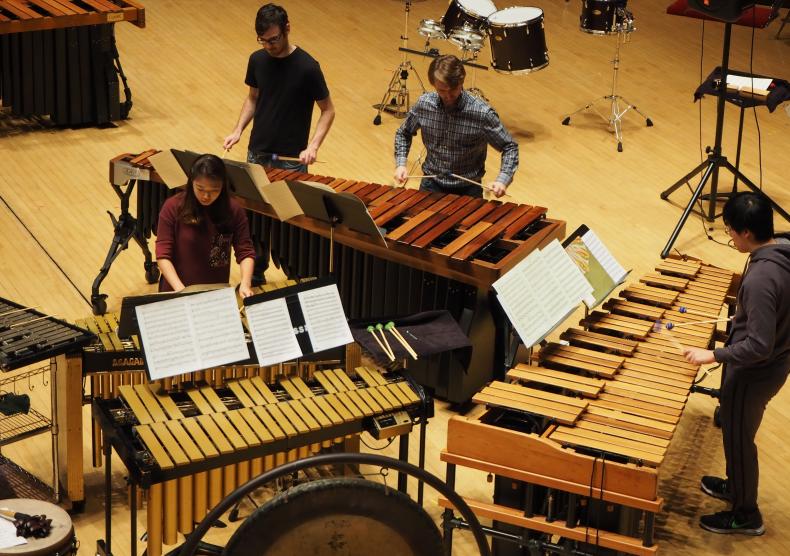 The Shepherd School of Music has one of the country’s most active and productive percussion studios. Carefully selected from both graduate and undergraduate applicants, this intense group of students works under the full-time guidance of its director, Matthew Strauss. Members of this group have consistently won places in every major summer festival, most recently Tanglewood, the National Repertory Orchestra, the National Orchestral Institute, the Pacific Music Festival, and the Spoleto Festival.

Professionally, former students are performing with symphonies in Vancouver, Honolulu, Puerto Rico, and Detroit, as well as with the U.S. Marine Band. Current students are frequently engaged by the Houston Symphony Orchestra as extra players.

Private lessons and percussion classes provide concentrated teacher/student interaction, while other opportunities, such as ensemble concerts, solo recitals, opera and symphony performances, new music forums, and master classes, enable members of the studio to accumulate a terrific amount of performance time during their years at the Shepherd School.

“Our objective,” says Mr. Brown, “is to produce thoroughly qualified and artistically sensitive musicians who are prepared with the skills needed to make a living as percussionists.” Richard Brown is Professor of Percussion at The Shepherd School of Music, principal percussionist of the Houston Grand Opera Orchestra and the Grand Teton Music Festival Orchestra, and plays regularly with the Houston Symphony. He has performed with the Chamber Symphony of Philadelphia, the United States Army Band, the Metropolitan Opera, the New York Philharmonic, several Broadway shows, and with Ann-Margret’s stage band.