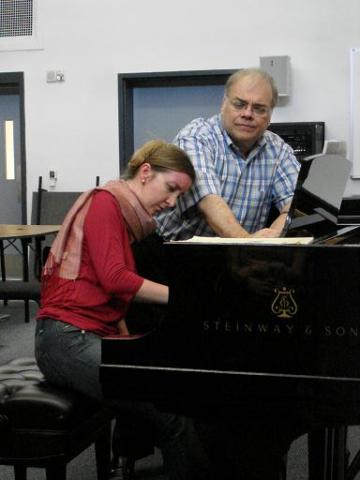 Robert Roux began his career at age 10 with a performance on the nationally televised Lawrence Welk Show. Since that time, he has been a winner of several piano competitions in the United States, including the United States Information Agency’s Artistic Ambassador Competition and the International Piano Recording Competition. A Steinway Artist, Roux’s performances include appearances at the White House, the John F. Kennedy Center for the Performing Arts and Library of Congress in Washington, D.C., Merkin Concert Hall in New York, Stude Concert Hall in Houston on the Horowitz Steinway, St. Petersburg Conservatory of Music, and Villa Pignatelli in Naples. He has toured as recitalist and concerto soloist in sixteen countries; Nuremberg Nachrichten, Germany’s third largest daily newspaper, deemed him “...a smart interpreter of Viennese classicism whom we should bear in mind...” Clavier magazine, referring to a three-day American Liszt Society festival held in 2002, deemed Roux’s performance of the Liszt Sonata “...the most stunning playing during the festival...for which the audience offered a well-deserved standing ovation.”

Dr. Roux’s students have been frequent prize winners and award recipients at the national and international level. He has been featured as a master teacher at the World Piano Pedagogy Conference, and also has taught on the faculty of the University of Southern California at Los Angeles, where he took over John Perry’s class in 1995. He has been Associate Director of the Prague International Piano Masterclasses since 1997, and has served on the faculty of the prestigious Van Cliburn Institute, the Moscow International Piano Masterclasses, the Paris International Piano Sessions, and the Association of German Music Schools. His list of teachers and coaches include Lili Kraus, Adele Marcus, William Race, and Leonard Shure. He is listed in Who’s Who in America and is also interviewed as one of the top teachers in Benjamin Saver’s publication, The Most Wanted Piano Teachers in the USA.